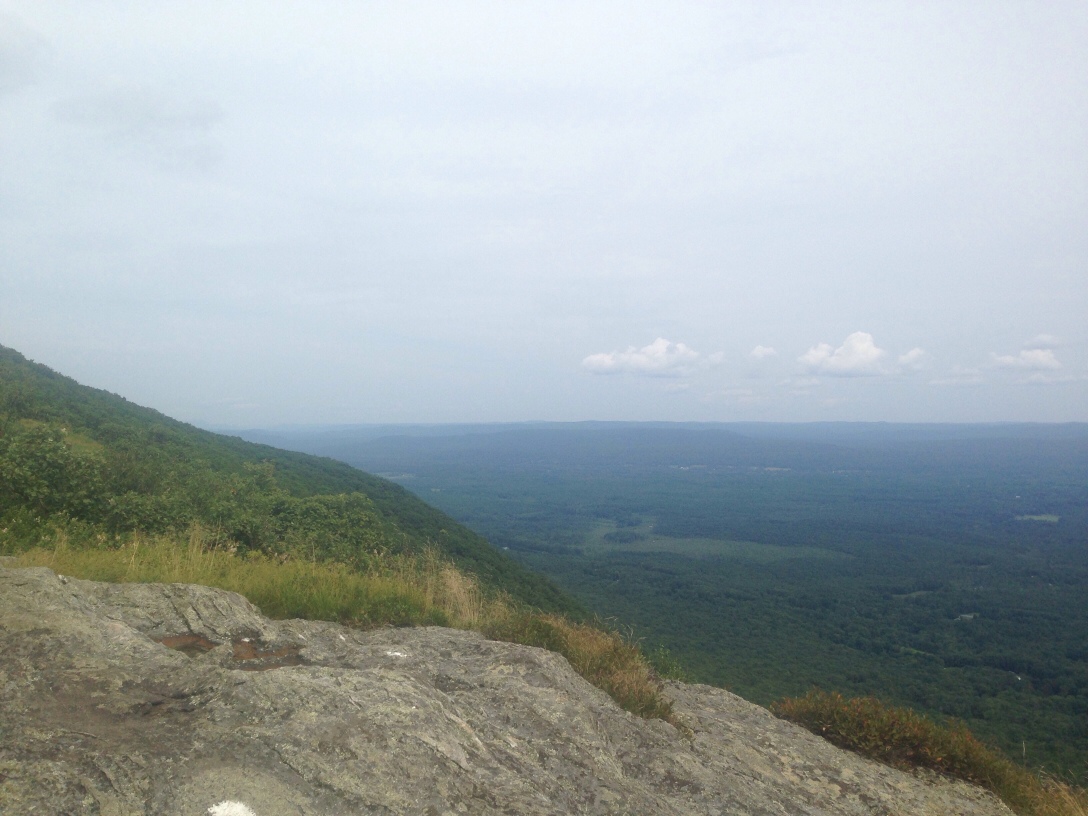 The Doc said it would take about five days on antibiotics before I would start to feel better. After feeling so bad the first day after I left Maria’s, and going into the next town, I was worried.

I got a ride to the trail from the motel by a shuttle driver who worked by donation. I was so glad, because I had walked about 3 miles on asphalt in the sun to get into town. The good thing was that there was a roadside stand where I bought an ice cream cone. 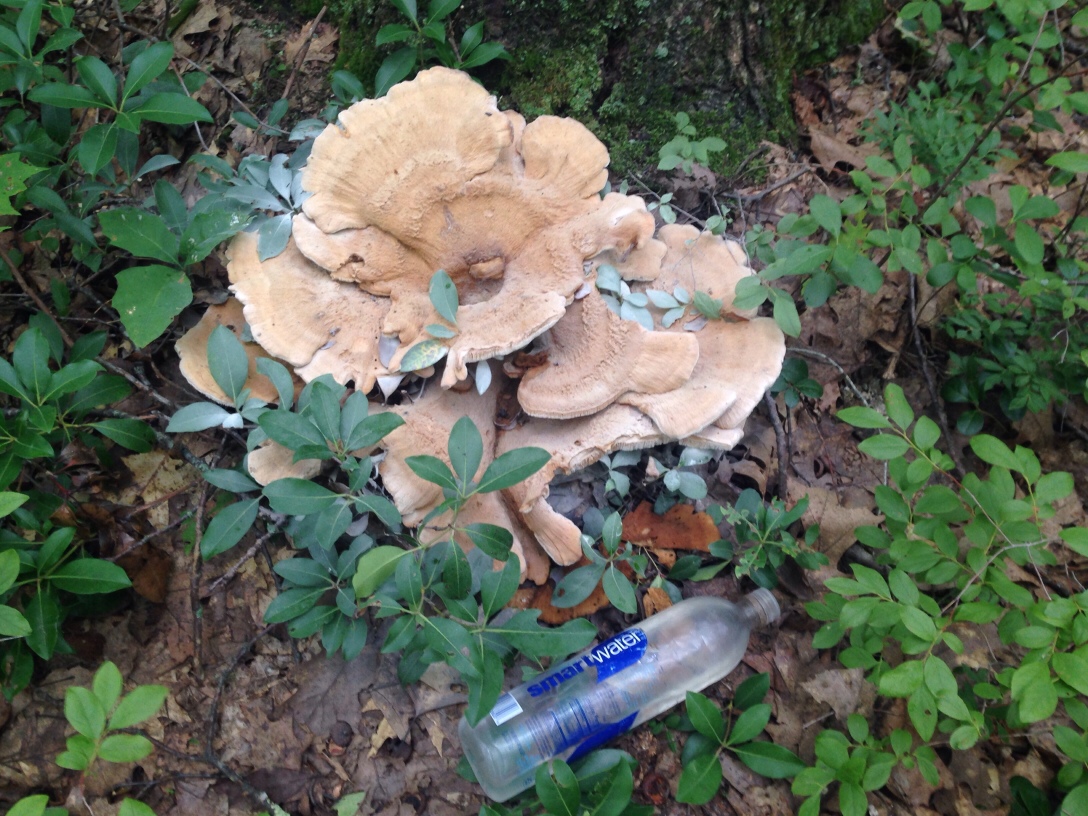 The fungi have been prolific in Massachusetts! There has been every color, size and shape you can imagine. I have restrained myself from taking pictures of them all. That is a liter sized bottle in the pic above.

It started raining a little before noon. It was awful. I’d had tentative plans to stay in the shelter. I sat in the shelter and ate my supper. Not long after I started, a group of SOBOs came and tracked in water and mud in the shelter. I tried being friendly, but it was like pulling teeth to get them to have a conversation with me. When the rain let up, I decided to put up my tent. It started raining again while I was setting it up and everything was saturated by the time it was up….even the sheet of plastic I usually put down when the tent floor is wet. I spent the night trying to keep my quilt on my sleeping pad and up off the wet floor. I was so miserable, but at least I had my own private space. It absolutely poured all night long. I was so tired! I had only done 13 1/2 miles, but it felt like I had done 20! 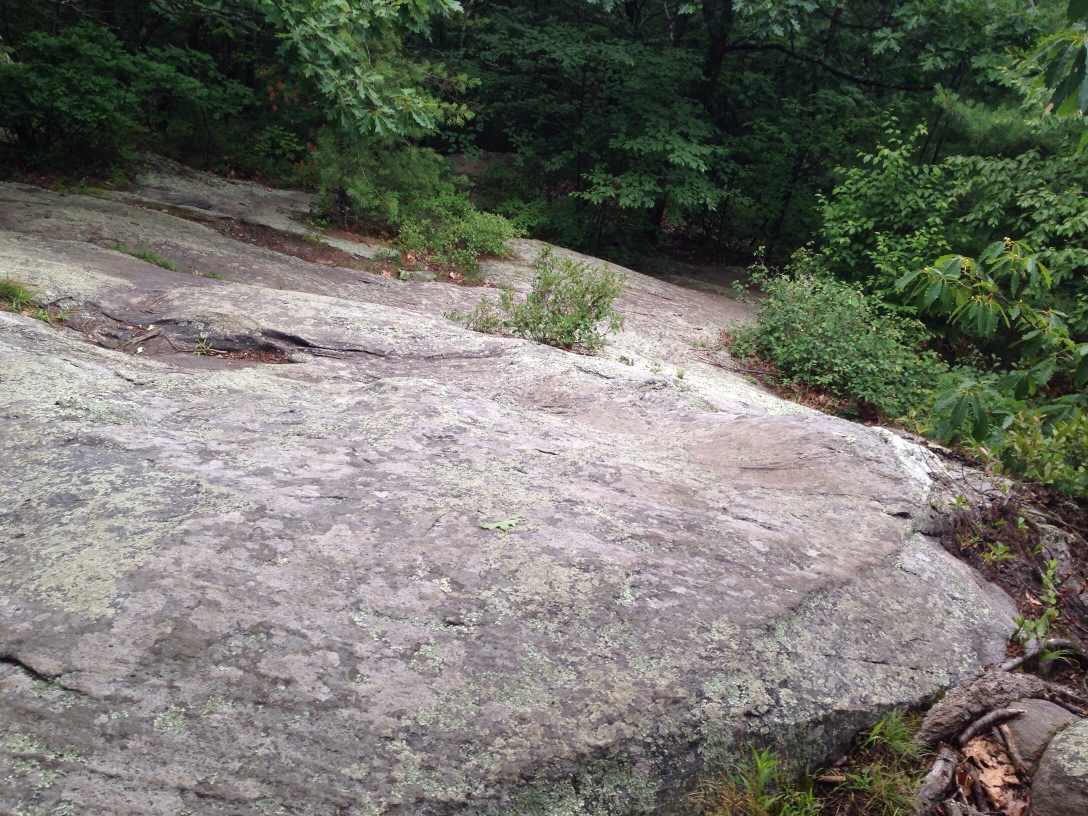 It was still dripping and gray when I ate breakfast. The sun eventually came out, and it was humid. When I came to a road crossing, there was a snack shack that operated on the honor system. I sat with another hiker (can’t remember his name) and had a freezer pop, a Pepsi and some cheetohs! What a way to brighten a day! 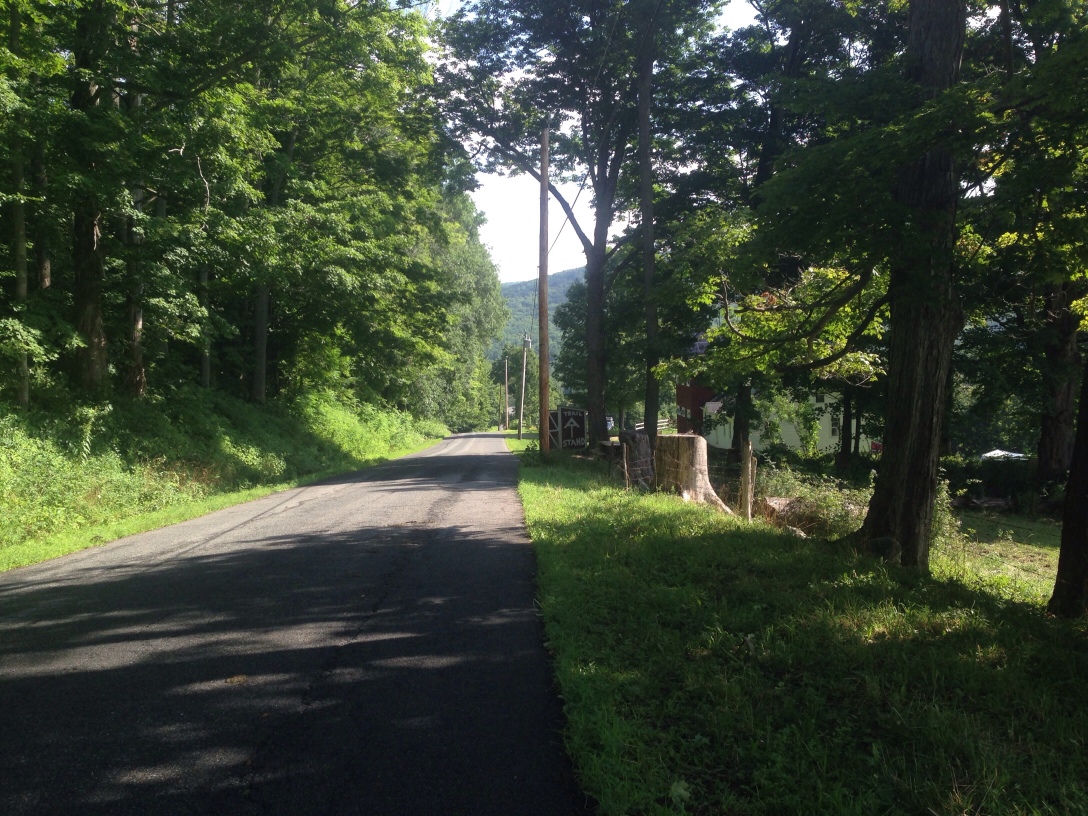 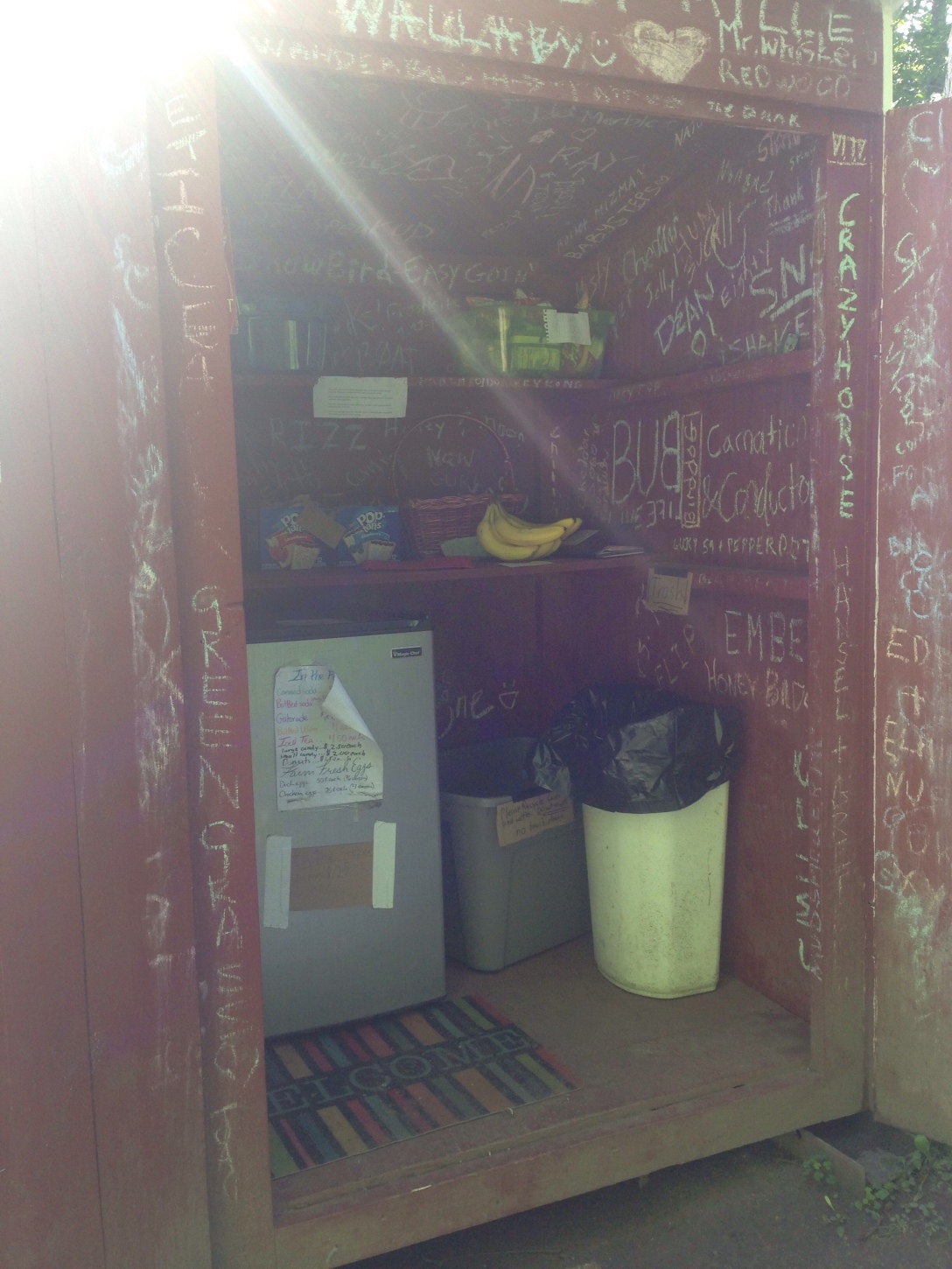 I crossed a field and came to a plank walk. Before I knew what happened, my feet had slipped from under me and I landed on the plank on my butt! I imagine it looked like those cartoons where the character slips on a banana peel and his feet go out from under him. That’s what it felt like, anyway. When the other hiker passed me, he started telling me how he ‘bit it’back there. I said, “On the planks?” When he said yes, I told him I did too! He laughed when I shared the description of the banana peel, because it felt so accurate.

Later, I got off the trail and went into the woods to use the bathroom. Lately, the trail has been narrow, and little more than pine needles or leaves that have been packed down. I usually drop my pack on the trail and just take the supplies I need with me. When I was finished, I walked back in the direction I had left my pack, but I couldn’t find the trail! I was scared, and had visions of ending up like Inchworm (only she had her backpack with her)! I did some heavy praying, and tried not to walk very far. I went back the way I came. By some miracle, I saw a tree with a white blaze and looked down and saw the trail. You have no idea how easy this is to do!

When I found the trail, I was completely turned around and had no sense of direction. I walked back and forth on the trail several times before I found where I had left my backpack! From now on, I’m taking my phone with me, which has the Guthook app that will show me exactly where I am at and also where the trail is!

That night, I stayed at the cabin at Upper Goose Pond. It’s a cabin on a pond that has bunks on the upper floor. It has no electricity or plumbing. The caretakers serve pancakes and coffee in the morning. It is by donation. 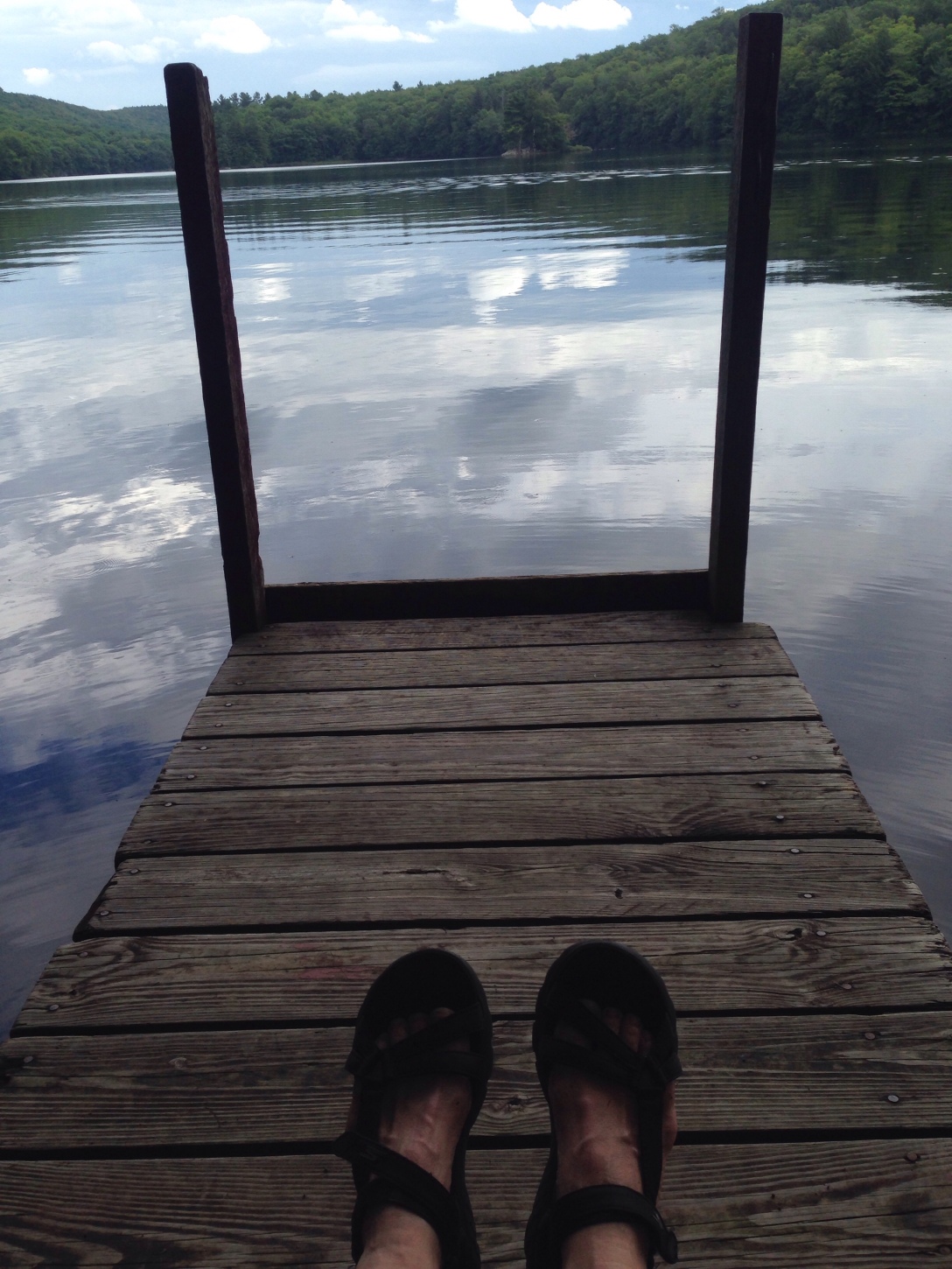 I got there early enough that I was able to swim in the pond. I was surprised at how warm it was! It was also clear water. I didn’t actually swim. I dunked and hung out by the dock. It felt good to wash off the mud, sweat and insect repellent. It was also very peaceful. Eventually, it started clouding up…and it rained. All night long. I was grateful to be under a roof! 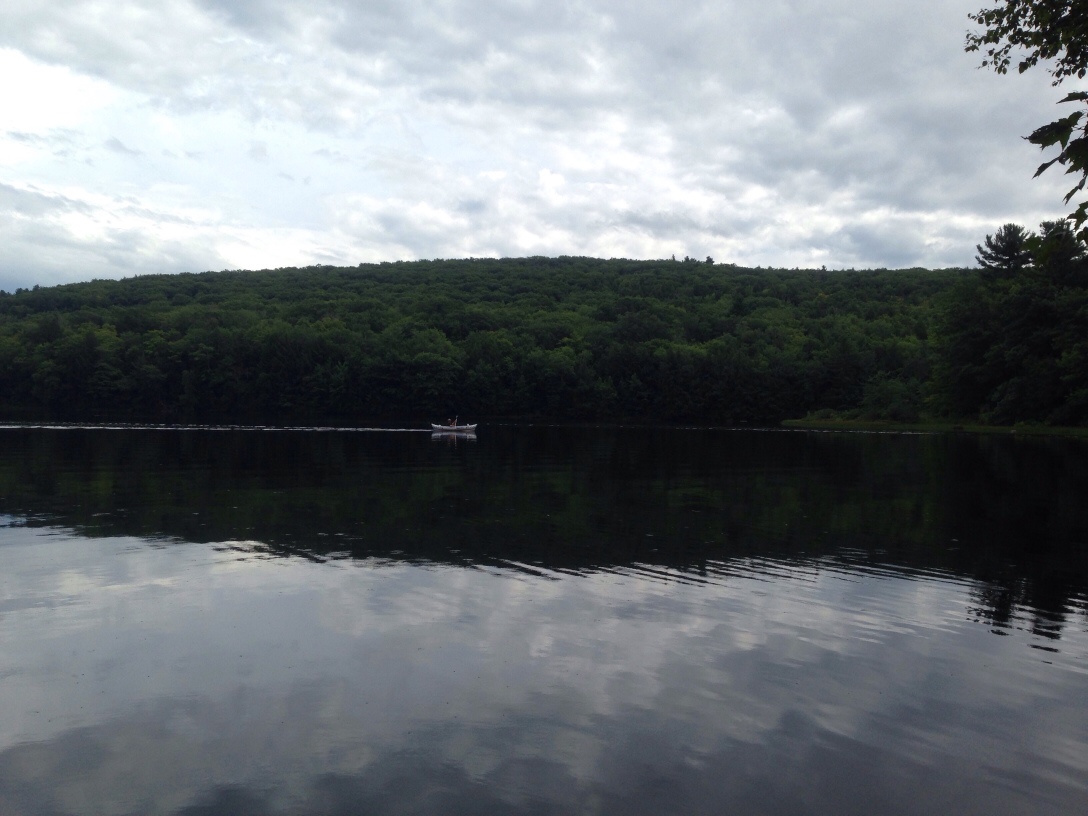 I left early. It has been taking me longer to do the miles. The terrain has been more challenging, but I have still not been feeling up to par. I have been going to bed around 5:00 and sleeping until 5:00 the next morning. Sometimes I wake up , but go back to sleep. My legs still feel weak, and my leg muscles still hurt. I’m tired. I still feel better than before I started taking the antibiotics, but not up to par. Sometimes I think I might still be running a low grade fever.

On this day, there were rocks, roots and lots of mud and boggy places. There were only a few short sprinkles, but I knew more rain was coming. About three miles before my shelter, there was a white van with trail magic. It was a hiker I hadn’t seen since Harper’s Ferry, and his Dad. They had cold sodas, Gatorade, fruit, chips and sweets.

I opted to stay in the shelter. It had separate platforms, so it afforded a little private space. I chose an upper platform so that gave me even more privacy. I have been worrying about trees falling, lately, and I knew the rain was supposed to be heavy. I put on insect repellent, and it was cool enough to snuggle into my quilt for protection from the mosquitoes.

It rained all night, and I slept well.

I had a short 2.5 Miles in the rain to get to town. I stopped by a hardware store to buy denatured alcohol for my stove. The guy at the store let me fill up my bottle for free! I had a wait before I could get into my room, but once I had a shower and clean clothes, all was well. It has taken most of the afternoon to get everything done. Everything I own smells like mold, so I washed my backpack in the shower (no tub). A lot of my stuff was dirty and had pieces of leaves and debris on it, so it needed to be cleaned. My rain gear needed to be aired out and dried out, as well as my tent and shoes. My maildrop had to be picked up, and then organized and put away. I had to go get something to eat. It just seems like I never get much rest in town.

It was supposed to rain today, but it cleared off and is now sunny. I’m heading out tomorrow. Yes. I’m still worry about making it to Mt. K in time. No one around me seems to be worried. I miss my ‘trail family’. I use the term loosely because I hike independently. Mainly, I miss seeing friendly faces I know, and who know me. Maybe I just got too comfortable, and I need to try harder to make new friends. Most don’t seem to want to be friendly, in spite of my efforts. 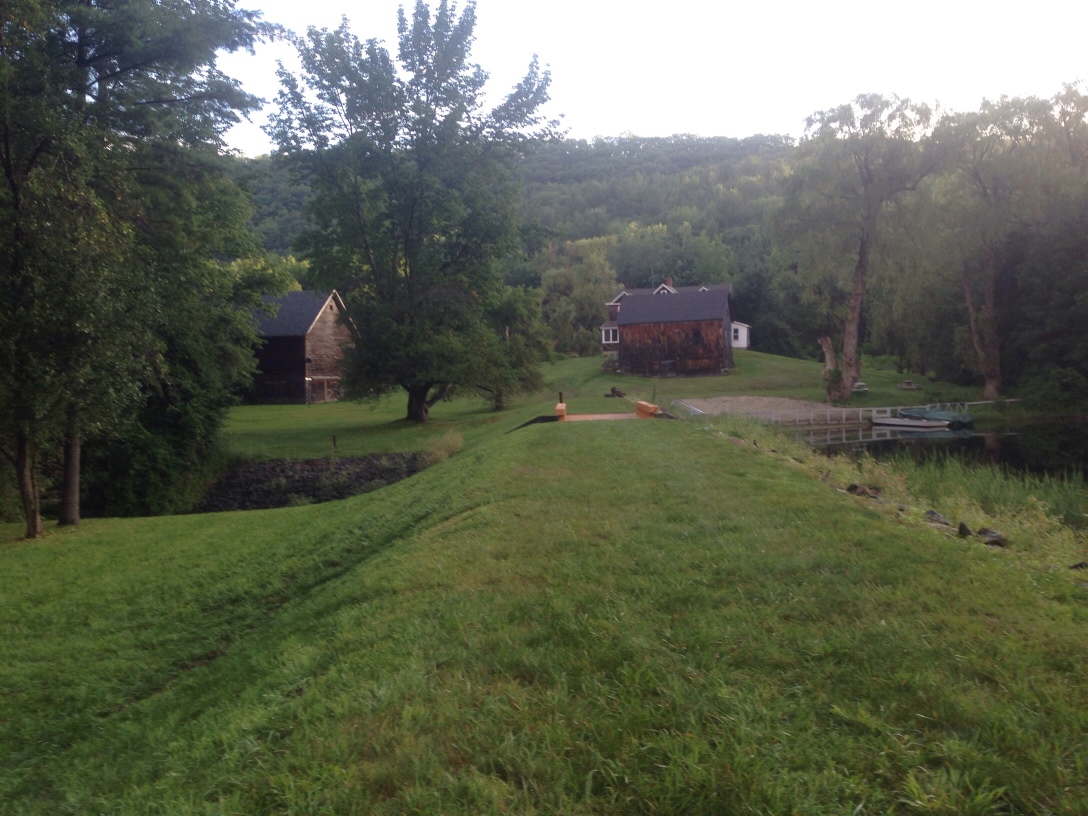 That’s all of the news from Massachusetts!

13 thoughts on “On The Fifth Day, She Felt Slightly Human”